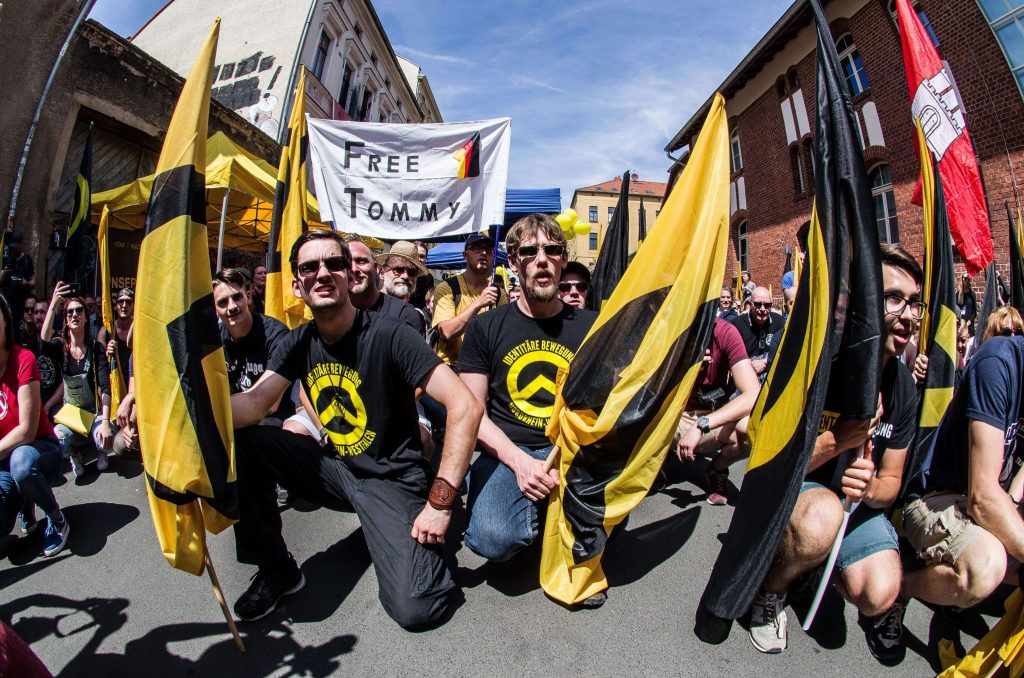 Last week, Global Project Against Hate and Extremism (GPAHE) released a report documenting the proliferation of Identitarianism and Generation Identity (GI), the sprawling international white nationalist movement, on Twitter and YouTube. Identitarianism, which is pushed by Generation Identity and its dozens of chapters and thousands of adherents, aruges that Muslims and migrants are replacing the “true citizens” of their countries with non-white people, otherwise known as the Great Replacement theory. As a result of the GPAHE’s findings, Twitter deplatformed dozens of dangerous Identitarian accounts across the globe with tens of thousands of followers, including that of Martin Sellner, the unofficial leader of the movement and head of the Austrian GI chapter. And PayPal deplatformed Ein Prozent/Laut Gedacht, which also promotes Identitarian ideas, after having previously removed most GI access. When faced with evidence that not only was Generation Identity thriving on its platform but also receiving funds through monetized videos, YouTube was dismissive, only taking a couple of videos and ads down, calling it a ‘glitch,’ and saying there wasn’t much money involved. [YouTube removed Sellner’s accounts on July 13.] Twitter and Facebook still have much work to do to eliminate Identitarian and other forms of extremism from their platforms. Now that Generation Identity chapters are removed from Facebook and Twitter, YouTube is the gateway for this dangerous movement to recruit and radicalize white youth worldwide into white supremacy.

GPAHE found at least 12 countries represented by 31 GI chapters with 86,000 subscribers on YouTube. These numbers do not include the hundreds of videos posted by GI adherents or the number of times Identitarian proponents have appeared on other channels followed by tens of thousands of additional subscribers. GPAHE also documented in its report that numerous presidential campaign ads were appearing on GI extremist videos, as were more mainstream advertisers. We do not believe that this ad placement was at the request of the campaigns or any other advertiser. Rather, it is a function of YouTube’s faulty advertising algorithm. Political ads also appeared on Ruptly/RT videos featuring extremist content. YouTube places a disclaimer on Ruptly/RT videos, saying “RT is funded in whole or in part by the Russian government.” If YouTube feels the need for a disclaimer, why does their advertising algorithm run campaign ads there? After the GPAHE report was published, Google told Politico Europe,“that a technical error had allowed ads to run against the white supremacist channel, a glitch that has now been fixed. The company said the videos linked to a Russian-backed media outlet had also now been limited from displaying ads because of violations of its content policies.”

“We have strict policies prohibiting hate speech on YouTube and terminate any channel that repeatedly or egregiously violates those policies,” Charlotte Smith, a Google spokeswoman, said in a statement.

They may claim this was all a “glitch,” but in the days since the report ran and YouTube corrected ‘glitches,’ GPAHE has viewed and documented numerous additional examples of political and mainstream advertisements on extremist GI and Ruptly/RT content. Additionally, we have documented the fact that YouTube is selling banner ad space to the French chapter of Generation Identity which drives viewers to their anti-Muslim, anti-migrant website. The site makes it clear that GI is all about recruiting young people.

Again, we do not believe that these advertisers nor the political campaigns requested this placement:

From the first GPAHE report

We believe these examples to be a gross undercount of the advertisements on YouTube extremist content. It is completely unreasonable and untenable for civil society actors and watchdog groups to take on the labor of documenting GI-related activity online. YouTube and all online social companies have both the resources and the responsibility to monitor their platforms and to disarm Identitarian and other extremist groups of what is currently a key organizing tool.

According to a 2019 Hootsuite marketing report, YouTube has two billion logged-in monthly users, 500 hours of video are uploaded every minute, and YouTube will make $5.5 billion in the US alone in 2020. And 81 percent of 15 to 25 year-olds in the US use YouTube, with 70% of viewed content coming from YouTube’s recommendations algorithm. These are frightening numbers as we think of YouTube’s inattention to white supremacist content and the potential of young, white males to be radicalized online.

YouTube’s preferred punishment for violating its content policies seems to be the limitation of ads rather than deplatforming, leaving the content creator the possibility of eventually monetizing their accounts again in a variety of ways.

The enforcement of YouTube’s content policies is highly subjective. Its hateful content policy states that, “Hate speech is not allowed on YouTube. We remove content promoting violence or hatred against individuals or groups based on any of the following attributes: age, caste, disability, ethnicity, gender identity and expression, nationality, race, immigration status, sex/gender, sexual orientation, victims of a major violent event and their kin, and veteran status.” And its Violent Criminal Organizations policy, which references only crime and terrorism, not extremist organizations, states that, “Content intended to praise, promote, or aid violent criminal organizations is not allowed on YouTube. These organizations are not allowed to use YouTube for any purpose, including recruitment.”

Violations of both these policies and its advertiser-friendly content guidelines result in a review. For example, if YouTube deems that content is close to hate speech, the video may be removed and/or some features may be limited. If content fully violates the policies, the creator will receive a warning. Three strikes for repeated behavior within a 90-day period results in termination; however, strikes expire every 90 days. The Google spokesperson used the word egregious in her statement about content, but we have no way of knowing Google’s definition of egregious and how it relates to their policies.

With policies that allow so many chances for extremists to keep their content up, it’s no wonder that YouTube is a favorite platform of the Identitarian movement and the young people who follow it.

The Identitarian movement is not based on a purely philosophical position. As white supremacist Identitarian ideas have spread across the Western world, so too has violence by lone actors motivated to stop the supposedly impending white genocide. Since October 2018, there have been at least six mass attacks motivated by Great Replacement ideas. Besides the Christchurch, N.Z. killings, attacks were staged at two American synagogues, an El Paso Walmart, a synagogue in Halle, Germany, and two shisha bars in Hanau, Germany, where the shooter is believed to have been targeting Muslim immigrants. These attacks left a total of 99 dead.

In September 2019, the American Department of Homeland Security (DHS) declared white supremacy as big a threat as ISIS or Al-Qaeda. DHS further warned that “white supremacist violent extremists have adopted an increasingly transnational outlook” that is driven by connecting with “like-minded individuals online.” DHS specified sharing of the “ethnic replacement” idea as particularly problematic. In June 2020, the U.S. State Department announced that white supremacist terrorism “remained a serious challenge for the global community.”

The Great Replacement also made an appearance during the August 2017 protests in Charlottesville, Virginia, where the unnerving chants of “Jews will not replace us” and “you will not replace us” could be heard as an ominous warning. The weekend left an anti-racist protester dead and several others injured at the hands of white supremacists.

In August 2019, the National Counter Terrorism Center quietly added white supremacist violence to its mandate. In February 2020, the FBI announced that it now considered the risk of violence from such groups as “on the same footing” as threats posed to the country by foreign terrorist organizations such as ISIS and its sympathizers.

Last summer, Germany’s Bundesamt für Verfassungsschutz (BvF), the agency responsible for tracking domestic extremism, classified the Identitarian movement as “verified extreme-right” saying its views were not compatible with the German Constitution and democracy. The move allows the BvF to more heavily surveil and infiltrate the German branch of Generation Identity.

Online social platforms are allowing this material to proliferate at the same time that intelligence and law enforcement agencies are trying to curtail this dangerous movement and its violence-inspiring ideas.

The white supremacist killers in these attacks did not pick up their ideas of white genocide and the great replacement randomly. The Identitarian movement uses its massive online presence to spread its abhorrent anti-Muslim and anti-immigrant messaging, and to warn of a coming civil war while assiduously recruiting young people into its ranks and ideology. Identitarians’ real-world publicity stunts targeting Muslims and immigrants provide fuel for its online audience in the form of viral images, YouTube videos, music, and press coverage, all of which help draw in more young people.

It is particularly disturbing that a movement whose ideas are linked directly to terrorism and the building of an international white supremacist network conducts its online organizing in plain sight. These mainstream accounts are then used to drive traffic to darker corners of the internet. where messaging is even more explicit and offers no pretense of acceptance of Muslims, refugees, and immigrants.