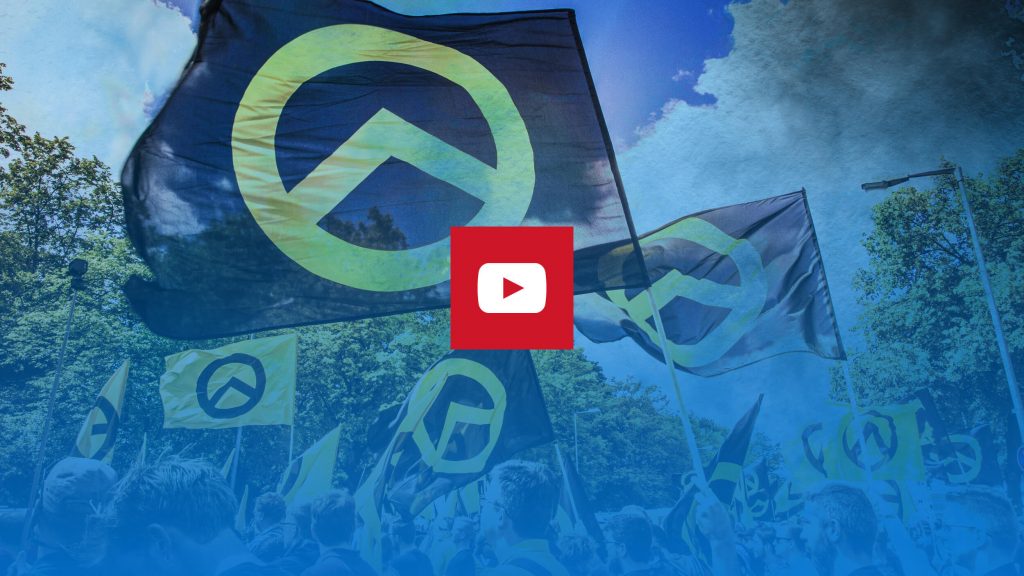 By Wendy Via And Heidi Beirich

By Wendy Via And Heidi Beirich

In July 2020, the Global Project Against Hate and Extremism (GPAHE) released a report, “International White Nationalist Movement Spreading on Twitter and YouTube,” that documented the sprawling international network of the white supremacist group, Generation Identity (GI). Generation Identity is best known for spreading “The Great Replacement” propaganda which is connected to multiple terrorist incidents.

At the time, GPAHE found dozens of GI Twitter accounts in 14 countries with hundreds of thousands of followers and 31 GI chapter and individual YouTube channels with tens of thousands of subscribers. On YouTube, GPAHE also found ads running on this hate material, including presidential campaign ads, meaning regardless of many claims to the contrary over the years, YouTube was in fact monetizing hate.

Within a week of our report, Twitter removed nearly all the GI accounts from its platform (Facebook had removed them a year earlier). YouTube did not. In February 2021, all but two of the GI YouTube channels documented by GPAHE remained, with some videos still being monetized.

Now, according to a new GPAHE count, there are more GI channels than ever on YouTube, 54 of them with a subscriber base of over 100,000 people. Individual adherents of GI have another 12 channels, with thousands of subscribers. Not only are the number of channels devoted to this content growing, so too is the subscriber base. (Given the widespread and ever-growing nature of the Identitarian movement, GPAHE is not claiming that this count is exhaustive. Indeed, it probably isn’t.) And of course, video viewership numbers continue to rise the longer the content is up.

It is incomprehensible, and frankly morally bereft, that YouTube continues to host this white supremacist, violence-inspiring content and allows it to proliferate on its platform. GI’s main propaganda pushes the racist and antisemitic ideas behind “The Great Replacement” conspiracy theory, a white supremacist talking point that claims that white people are being replaced by immigrants, Muslims, and other people of color in their so-called “home” countries. The conspiracy often blames the “elite” and Jews for orchestrating these changing demographics. These dangerous and false ideas have spurred multiple terrorist attacks across the globe in recent years, including the 2018 attack on the Tree of Life synagogue in Pittsburgh, the 2019 attacks on the El Paso Walmart, a Halle, Germany, synagogue and the Christchurch, New Zealand, mosques.

These attacks have murdered dozens and injured more. Make no mistake. There is a direct connection between GI, the hateful ideas the group pushes and this violence. For example, the shooter in New Zealand was so inspired by GI and its ideas that he gave a donation to one of its chapters and unsurprisingly titled his manifesto on why 51 people had to die, “The Great Replacement.”

YouTube bears a special responsibility when it comes to GI, Great Replacement propaganda and the devastating events in Christchurch. In December 2020, the New Zealand Royal Commission on the Christchurch shootings found that the shooter was radicalized by YouTube content. It is incredible that GI has been largely deplatformed from Facebook and Twitter, but runs rampant on YouTube, especially after the damning conclusions of the Royal Commission’s report.

Not even the utter tragedy of the Christchurch shooting has moved YouTube to remove this hateful terrorist-inspiring disinformation. Neither have government policies to rein in the group or prosecutions of GI members for violence.

In December 2020 in France, three GI members were convicted of assault, with one also convicted for incitement to terrorism. In March 2021, France banned Generation Identity for incitement to discrimination and hatred and violence, according to Interior Minister Gérald Darmanin. Yet on YouTube, 10 official GI chapters remain active, and a search by a user in France showed that the material is available to YouTube users in that country. France may have banned the group, but on YouTube it thrives.

As part of a rash of anti-terror measures, in January, Austria banned symbols associated with that country’s Identitarian movement. But, GPAHE’s research shows that GI’s main Austrian chapter continues to proudly display the group’s symbols on its YouTube videos. The channel is available in Austria on multiple providers and through mobile searches, indicating that YouTube is not concerned with the display of hate symbols in a country that has banned them.

GPAHE’s recent searches of GI YouTube channels found more ads on videos posted by individual Identitarian adherents and group chapters. The GI Hessen chapter displayed ads for the vacation rental service, VRBO (requests for comment from the company in recent months about its ads being placed on hate content were not returned).

Patrick Lenart, a leader of GI’s Austrian chapter, has had ads from VRBO, Ashley HomeStore, Advance Auto Parts, and celebrity Jesse James Decker’s company, Goli, running on his videos. Alex Malenki, of GI in Leipzig, has ads on his videos from a German video game maker. (In 2020, Vice revealed that a video game where players could kill antifa members allowed players to choose to be Malenki in the game. YouTube did remove GI channels Laut Gedacht and Ein Prozent in connection to this violent and racist game). There may well be more examples of such content as the ads change from day to day.

There are other problems in the GI content. YouTube allows GI channels to recommend other similar channels on their official pages. The Generation Identitaire channel, for example, has prominent links to IBWuppertal, GenerationIDDauphine, and allied channels including Defend Europe and La Traboule. At times, GI allies or chapters direct viewers to more GI content through popup ads in their own videos. On the right navigation, GI videos or similar content are also sometimes recommended.

YouTube GI channels are also used to drive viewers to sometimes even more explicit content off the platform. The La Traboule channel sends its viewers to related hashtags, Instagram accounts and Twitter, some of which are now defunct on the other platforms. The main German GI chapter includes information on its channel about its Telegram, Odysee and Gab accounts, as well as off-platform information for other GI chapters on Telegram and other sites. They also provide their bank account and cryptocurrency information for those interested in making a donation. Many channels send people to their main websites.

This is all part of the radicalization of viewers through recommendation algorithms that YouTube refuses to fix because it would impact their business model. In a particularly egregious example of algorithm recommendations, a search for Nordic Resistance, a neo-Nazi ally of GI, returns results for the neo-Nazi and very violent Atommwaffen, the antisemitic Ukranian paramiliary force, Azov Battalion, and the Satanic and pro-Nazi Order of the Nine Angles. The results link to videos and other material about these groups that can be found on YouTube.

YouTube’s policies on blocking and adding warning labels to content are far from uniform. For example, anti-Muslim racist and agitator Tommy Robinson has many of his videos behind a black warning page that says his content is problematic, and one must click through a screen to agree to seeing the material. But interviews with Robinson on exactly the same topics run on GI channels and have no labels, including a video called, “The Tommy Robinson Interview That Got Me Banned From The U.K.” posted by Brittany Pettibone Sellner. Pettibone Sellner, an American married to GI’s de facto international leader Martin Sellner, was banned from entering the U.K. to interview Robinson, but clearly is not banned by YouTube from publicizing Robinson’s views. Pettibone Sellner’s YouTube pages also drives individuals to her website where they can financially support her work.

Pettibone Sellner is now using her YouTube channel for new ventures. Recent Pettibone Sellner videos are listed as sponsored by outside companies, which presumably allow her to raise funds. One of her backers is Ground News, an aggregator that claims to help “see the news from a different perspective.” Other videos are backed by what appears to be a business newly affiliated with Pettibone Sellner that sells preparedness goods. She is prominently featured on their website, My Patriot Supply, selling food packages and other materials for preppers that advertises “Prepare with Brittany” next to a photo of her.

It’s no secret that YouTube is not serious about its own commitments when it comes to deplatforming hateful content. Ample research has already shown YouTube fails to enforce its own policies and that the site is one of the worst for hate and extremist content. A recent study by the Mozilla Foundation substantiated that YouTube routinely recommends videos that violate its own content policies and that most problematic content is promoted by YouTube’s own recommendation systems.

Perhaps we shouldn’t be shocked by YouTube’s recalcitrant approach to Generation Identity content and other racist, radicalizing content, even in the face of New Zealand’s Royal Commission report on Christchurch, Dylann Roof’s murder of nine churchgoers in Charleston and hundreds more deaths. But we are.

Previous Post
GPAHE Co-Sponsors United Nations Counter-Terrorism Week Official Side Event
Next Post
Six Months After Jan. 6, The Far Right Is Far From Down And Out
Close