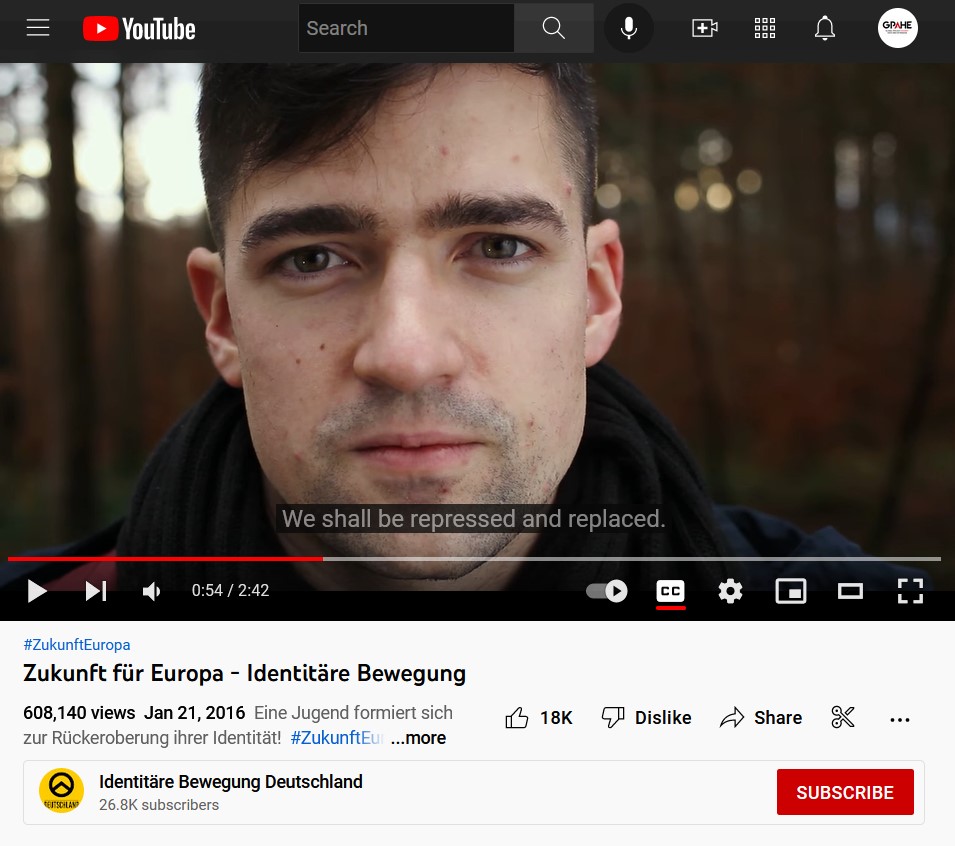 Review shows that the platform is rife with harmful content and its labeling efforts are inadequate – especially in non-English languages.

Review shows that the platform is rife with harmful content and its labeling efforts are inadequate – especially in non-English languages. 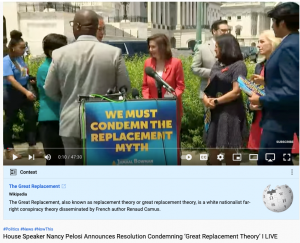 Why is this video of a House resolution flagged? Because YouTube flags videos by title instead of content.

YouTube took down a video posted by the January 6 House committee depicting former President Donald Trump and his election lies because it violated its policies on election misinformation due to “insufficient context.” But they still allow Trump to spread those exact same lies on the platform. When YouTube “deplatformed” Trump, they left his channel up and his videos in place, including his December speech denying the election results and clips of his January 6 rally.

Meanwhile, since the Buffalo shooting, YouTube has not done enough to address the proliferation of the racist “Great Replacement” conspiracy theory, a conspiracy that has provably motivated mass murders and dozens of deaths around the world.

This is a pattern for YouTube. They routinely do the minimum to deal with extremely problematic content – even with content that inspires terrorism. Prior to the recent white supremacist Buffalo shooting, this author had repeatedly viewed videos explicitly pushing the replacement theory and found only sporadic application of a “Great Replacement” conspiracy theory disclaimer, a label linking to the “Great Replacement” Wikipedia page calling it a white nationalist conspiracy theory. But, the massive amount of media coverage of the Buffalo shooting and the attention brought to the replacement theory changed the search results on YouTube highlighting news clips more than those pushing the theory.

This is YouTube’s standard response to violative material that it doesn’t want to take down because it’s politically fraught. This, even though the shooter who massacred 51 Muslims in Christchurch, NZ in 2019 was found by a New Zealand Royal Commission report to be largely motivated by replacement theory and radicalized by content on YouTube.

Same with Trump’s lies about the 2020 election,which are sporadically labeled with the rather opaque language, “Robust safeguards help ensure the integrity of election results” that links to a CISA page on elections. What does that even mean? It in no way denies the lies being ruthlessly pushed on YouTube’s platform. And yet they take down a January 6 committee video for lacking context? 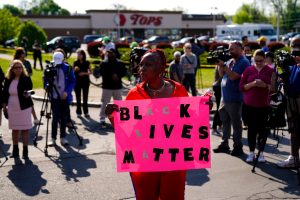 10 Black people were targeted and killed in Buffalo by a murderer inspired by replacement theory.

Now, after 10 more people were killed in Buffalo in the United States’ fourth mass shooting motivated by the replacement theory, YouTube has illustrated its lack of commitment to addressing content that inspires far-right terrorism.

The problem is that tweaking the algorithm for the words “great replacement” in a title is simple, and largely only leads to labeling content that is mostly already giving appropriate context to the conspiracy. It also appears that the farther down the search results page one goes, the less likely one is to find the disclaimer. 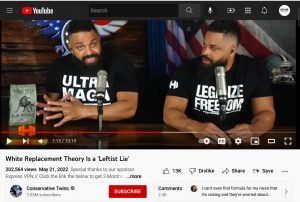 The Conservative Twins have an audience of more than 2 million people. This video titled “White Replacement Theory is a Leftist Lie” isn’t flagged by YouTube.

To be clear, the labeling protocol is not comprehensive. Some videos with the words in the title are still not flagged such as Daily Caller’s Why Are Dems Allowed To Discuss Great Replacement Theory But It’s Off Limits For Conservatives and the Conservative Twins,’ with 2 million followers, White Replacement Theory Is a ‘Leftist Lie.’

YouTube doesn’t appear to have done any real work to root out the actual purveyors of the conspiracy theory. That takes effort. So much content, including news pieces like Vice News’ The Racist Conspiracy Theory Conservatives Are Helping Spread, that discusses the replacement conspiracy theory but doesn’t have the words in the video title remain unlabeled, authoritative source or not.

So-called news outlets like Newsmax have no trouble spreading the conspiracy with impunity. Hosts Eric Bolling and Rob Schmitt talk at length about the replacement theory with no flag, further spreading this dangerous conspiracy theory and inciting resentment against immigrants and people of color.

It appears that unless replacement is literally in a video’s title, YouTube is not addressing the proliferation of this viciously racist and violent conspiracy theory. The truth is that those pushing the lie don’t typically put it in the titles of their videos, so YouTube’s ‘solution’ won’t work anyway. But if they insist on taking this interim step, it should be consistent. 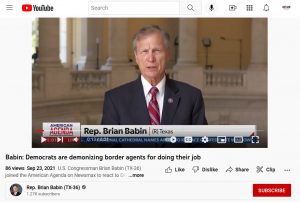 Here, in an unflagged video, Rep. Brian Babin argues that the American electorate is being replaced with third world immigrants.

Politicians are given exemptions to rules
Perhaps the most dangerous purveyors of the replacement theory are the politicians who  push the lie, and many of them have YouTube channels. For example, Rep. Brian Babin of Texas has a channel where he posts his TV appearances, including this Newsmax clip where he blatantly pushes the conspiracy. Another example is JD Vance of Ohio who posts his political ads, including this one that asks viewers if they hate Mexicans. None of these videos are flagged. One reason for this is YouTube’s misguided policy on politicians which allows violative content to remain if YouTube deems it educational, documentary/news, scientific or of artistic value. Additionally, they only require political ads to be legal in the region. As CEO Susan Wojcicki explained it, “When you have a political officer that is making information that is really important for their constituents to see, or for other global leaders to see, that is content that we would leave up because we think it’s important for other people to see.” This leaves an extraordinary amount of room for YouTube to allow harmful material pushed by politicians to remain on its platform. And politicians have large audiences, further driving these dangerous white nationalist ideas into the mainstream.

Politicians aren’t the only ones who get a pass. The extreme far-right purveyors of the replacement theory like Generation Identity (GI), a transnational white supremacist network that specifically targets young people for recruitment, have dozens of YouTube channels with hundreds of videos, some monetized. Only the occasional disclaimer is found. 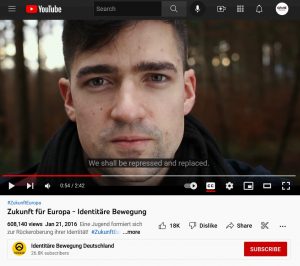 White supremacist network Generation Identity thrives on YouTube. Most replacement theory videos, like this one featuring GI leader Martin Sellner, are not flagged.

This GI network is directly tied to terrorism and other acts of violence against migrants and people of color, and its continued presence on YouTube is in direct contradiction to YouTube’s policy. In the wake of the Christchurch mosque massacres in March 2019, investigators found that the shooter was steeped in replacement theory and had communicated with Martin Sellner, then de facto leader of GI, giving him a €1,500 donation the prior year. Undeterred by mass violence directly connected to them, and not long after the Christchurch attacks, Generation Identity Austria held a protest against the “Great Replacement” in Vienna, calling for “remigration” and “de-Islamization.” Generation Identity has been banned in France, placed on a security watchlist in Germany, and its symbols banned in Austria. Facebook and Twitter have banned it, but it thrives on YouTube and some videos remain monetized.

YouTube has been warned many times about the dangers of allowing GI to remain on its platform in multiple countries and languages, but it has chosen not to adhere to its own rules and left the network in place.

One of the problems with content in multiple countries and languages is YouTube’s inability to translate and understand the context of videos perhaps due to lack of will, and a refusal to commit resources, as documented by the International Network of Factcheckers.

When it comes to stopping the “Great Replacement” conspiracy theory in non-English languages, YouTube is again failing. When searching for replacement theory information in Spanish in the U.S. for example, mostly news outlet pieces come up, but the results deteriorate as you go down the rankings. YouTube has placed a disclaimer on the search page and on several videos with great replacement in the title, mostly authoritative content, but the disclaimer is in English. No Spanish translation for the facts about the global “Great Replacement” conspiracy theory, although a Wikipedia page in Spanish exists that could be highlighted by the platform. And, as in other cases, there are several videos without disclaimers at all. In Spain, some of the video labeling from the U.S. transfers but seemingly only if one uses the Chrome browser. 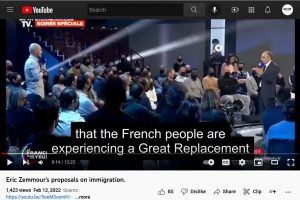 In France, where the “Great Replacement” term was coined and the conspiracy theory has been a heated focus of national elections for years, there is a disclaimer on YouTube search pages and some videos, but it appears that it’s the videos that already have the disclaimer from the U.S. And like in Spanish the disclaimer is in English, not French. It appears as if no real effort has been exerted to identify videos discussing the “Great Replacement” conspiracy theory, whether the term is in the title or not. Indeed, a video of Renaud Camus, the French author who coined the term great replacement, titled, “Cette élection présidentielle est un référendum sur le Grand remplacement,” (This presidential election is a referendum on the Great Replacement) is prominent and has no disclaimer. Additionally, all of the GI chapters that have YouTube channels, including the French ones, are visible in searches, even though the government has banned the organization.

It’s safer to be an American English speaker on YouTube

Looking at English-speaking countries outside the U.S. returned oddly mixed results. All searches returned less authoritative results than found in the U.S. and the disclaimer placement is inconsistent at best. In Canada and the UK, the search results and videos were flagged, but in Australia, there’s no flag at the top of the search page but some on the videos. 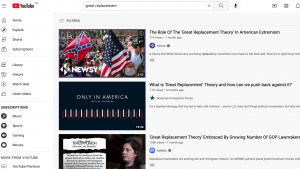 No flags in New Zealand, site of the deadliest mass murder inspired by replacement theory.

Perhaps most egregious, there are no disclaimers of any kind in New Zealand, the site of the deadliest mass shooting motivated by replacement theory, and where the government already issued a report that the shooter was largely radicalized on YouTube.

In summary, YouTube has either taken shortcuts wherever possible to mitigate the spread of the “Great Replacement” conspiracy theory or done nothing at all, while knowing the absolute danger it presents to people in the U.S. and around the world.

It is time for YouTube to apply their rules to everyone, including politicians, and in all languages. And it’s time to ban the replacement conspiracy theory altogether as YouTube announced that they would for QAnon in October of 2020. In its blog, YouTube wrote, “Today we’re further expanding both our hate and harassment policies to prohibit content that targets an individual or group with conspiracy theories that have been used to justify real-world violence.”

Nothing fits this description better than the racist Great Replacement conspiracy theory.