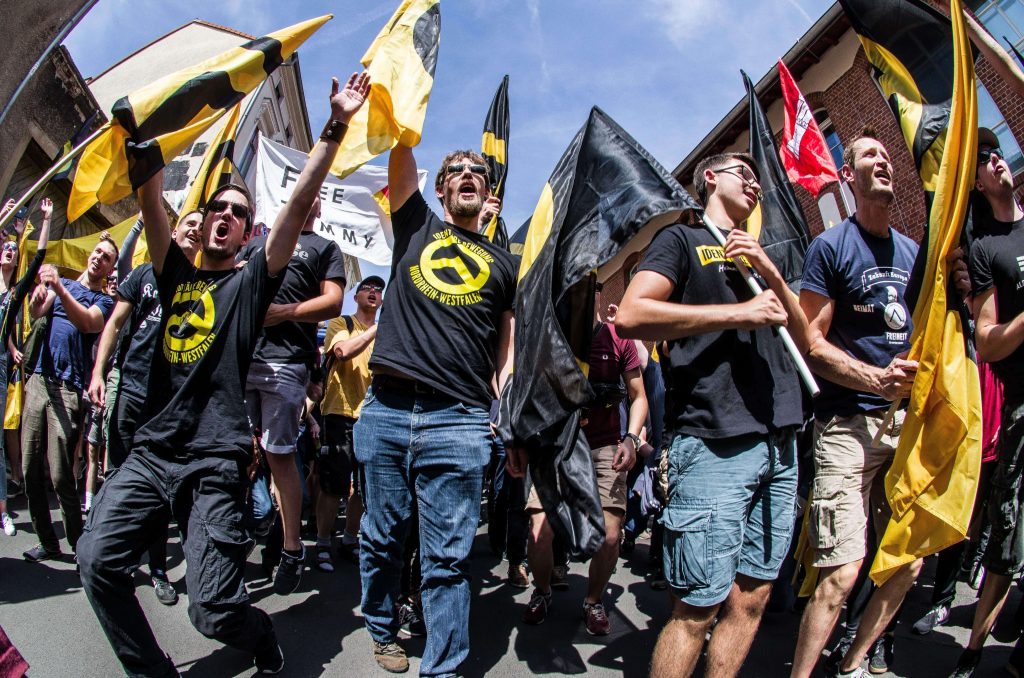 A June story in Coda described how Alexander “Malenki” Kleine, 28, a German member of the Identitarian movement and “an important influencer on Germany’s far-right scene,” along with his partner Phillip Thaler, produce a YouTube channel titled Laut Gedacht, meaning “Thinking out loud.” Laut Gedacht’s weekly videos regularly attract up to 200,000 views and push Identitarian messages among other topics, while supporting far-right figures such as Hungarian Prime Minister Viktor Orban.

But this isn’t some two-man, self-financed operation. Laut Gedacht is backed by the German group Ein Prozent (short for One Percent for Our Country), which was founded in reaction to the refugee crisis in 2015 and aims to spread nationalist ideas to young Germans. Ein Prozent has massive reach and substantial funding. Again according to Coda, “almost 50,000 people gave an average sum of $22 to Ein Prozent in 2018, allowing it to spend $425,000 on ‘patriotic proj-ects’ that year.” The group has held more than 80 right-wing cultural events across Germany and has more than 15,000 followers on Twitter.

Ein Prozent was co-founded by Götz Kubitschek, a former reserve officer in the German army, who served in Bosnia and was almost removed from the military for his involvement in extremist politics (his superior gave him a letter of discharge for participating in “right-wing extremist endeavors,” a decision overturned on appeal). The group’s other co-founders are Karl Albrecht Schachtschneider, a strong critic of the European Union, and Jürgen Elsässer, editor of the anti-Muslim Compact magazine, who is an admirer of Serbian hardliner Slobodan Milosevich and an outspoken supporter of Russian President Vladimir Putin.

Kubitschek, the key leader of the group, is extremely close to the anti-Muslim political party Alternative for German (AfD) and has spoken at rallies put on by PEGIDA, another anti-Muslim group. In 2010, he took part in a memorial march for the victims of the Allied bombing in Dresden, an event consistently dominated by neo-Nazis. His publishing house, Antaios, put out the surprise bestseller, “Finis Germania,” or “The End of Germany,” a collection of essays denounced as “right-radical, anti-Semitic and revisionist” by Der Spiegel magazine.

In 2019, Ein Prozent was banned from Facebook and Instagram for its links to the Identitarian movement. They sued Facebook, but the case was dismissed by a German court in June on the grounds that “social networks may exclude associations classified by [the networks] as ‘hate organizations.’” Facebook partly relied on the fact that Ein Prozent had financially supported the Austrian chapter of Generation Identity after Facebook listed the group as a hate organization. The court found that Facebook’s determination that Ein Prozent is “aimed at attacking people based on their ethnic origin or religious belief is justified.”

Projects backed by Ein Prozent include a youth magazine, music projects including the song “Europa” by a German rapper, and social media channels. It’s a slick operation with effective marketing that has nurtured networks of young influencers already well established in Germany’s far-right social media circles. The group funds Redpilled.de, which aggregates short films on topics such as violent crimes committed in Germany by immigrants, a number of which are made by Ein Prozent’s own in-house media operation.

Ein Prozent also connects Identitarians and other far-right nationalists across borders through its projects. For example, during summer academies held in Kubitschek’s hometown in Saxony, visitors have included Jack Donovan, an American activist in the anti-woman men’s rights movement, and Martin Sellner, leader of the Austrian chapter of Generation Identity.

Besides Twitter and YouTube, the group’s main platforms are its website and Telegram channel, where it had 7,000 subscribers as of June 2020. Banking isn’t a problem for the group as it has been for many racist groups in the US that have been banned from PayPal. The organization can accept funds through PayPal, Giropay, SEPA direct deposit, and Mollie’s SOFORT money transfer system as well as through credit-card donations.

Midterm elections are only 6 months away. To protect democracy, big tech must hold politicians to the same standards as everyone else
June 10, 2022

Midterm elections are only 6 months away. To protect democracy, big tech must hold politicians to the same standards as everyone else