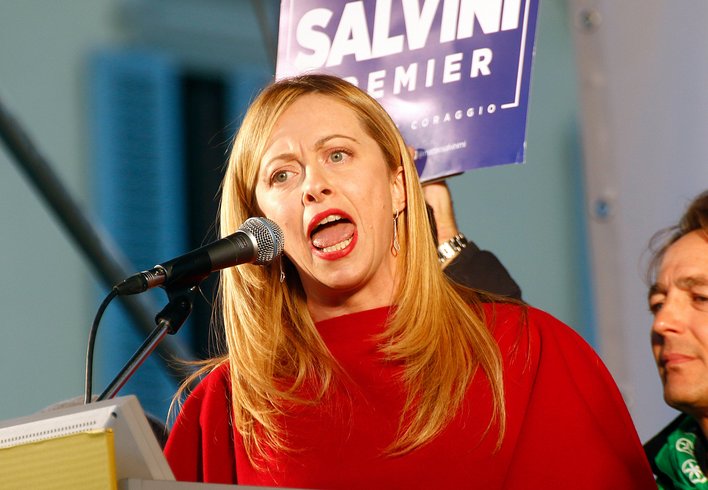 The Election of Giorgia Meloni in Italy, the Most Far-Right Leader Since Mussolini, is Only Part of Growing Far-Right Power Across the World

The election of far-right nationalist and fascist-leaning Giorgia Meloni as the next prime minister in Italy is as disturbing as it was unfortunately expected. She joins far-right authoritarian leaders like Viktor Orban from Hungary and Jair Bolsonaro from Brazil and was much congratulated by the right-wing political leaders in the U.S.

Meloni, who has successfully driven the once fringe far-right Brothers of Italy party from its origins in fascism straight into the mainstream, has openly stated her willingness to restrict rights and impose punishing policies for LGBTQ+ people, immigrants, women, and other marginalized groups. She once praised Mussolini as being a “good politician,” and has promoted the white supremacist “Great Replacement” conspiracy theory, tweeting “I think that there is a plan to erase everything that identifies us: culture, Nation, family are under attack.” Another time, she said she won’t allow for “ethnic substitution,” what she called a planned, willed invasion.

This is dangerous language and similar words have inspired mass shootings and attacks around the world, including at least four in the U.S.

In various speeches, including in front of the hate group World Congress of Families, Meloni has denounced what she calls “gender ideology” and the “LGBT Lobby,” and has railed against reproductive freedom and LGBTQ+ equality, including adoption by LGBTQ+ couples. Instilling fear about the LGBTQ+ community and immigrants is right out of the far-right extremist playbook and is bad news for democracy and freedom for all.

Meloni’s election also serves as a reminder that the far-right is growing and increasingly interconnected across the world. It’s no wonder that in the U.S. MAGA fans rejoiced with the news of her election. And, when the far-right doesn’t win elections, they work to undermine trust in electoral systems and, as we saw on Jan. 6th, resort to violence and lawlessness.

Beyond Italy, in recent elections, the far-right Sweden Democrats took power, the far-right National Rally increased its representation in France, and in Hungary, Fidesz, the party of far-right prime minister Viktor Orban, continues to bolster its strength. In Brazil, it remains to be seen if current far-right president Jair Bolsonaro, known as the “Trump of the Tropics,” will win the upcoming election, but if he doesn’t, his supporters may be plotting an insurrection like  January 6. And also like Trump, Bolsonaro planted the seeds of a rigged election so that he can refuse to leave. And, here in the U.S., despite his support for far-right extremism and his increasingly conspiratorial views, Trump continues to enjoy widespread support with a 2024 presidential run not out of the question.

With Meloni’s win, it’s increasingly clear that far-right movements, and the hate and extremism they embody, are a threat to freedom, safety, and democracy everywhere. That’s why GPAHE works to expose transnational hate and the networks between far-right political leaders and extremist groups. As we’ve shown, U.S.-based far-right groups like Alliance Defending Freedom have an outsized influence around the world, pushing policies that infringe on freedom and equal rights for all.  And, groups like the Proud Boys have started chapters in multiple countries, including Ireland, to push their white supremacist and misogynistic goals. Tech companies are a significant part of the problem. YouTube still allows the international network Generation Identity to use its platform and make money from their hatred.  And critically, we’ve documented how the companies continue to allow political leaders to spread hate and disinformation, contrary to the companies’ own rules and promises, which further undermines democracy. That’s why we’ve formed an international alliance with more than 70 human rights organizations from every region of the world to pressure the tech companies to uphold their responsibility to protect democracy.

Civil rights activist and poet Maya Angelou once said, “the truth is, no one of us can be free until everybody is free.” Across the world, interconnected far-right movements are infringing upon freedom and equal rights by weaponizing white-supremacy, hate, and bigotry. But we know the movement to support inclusive democracy is larger and stronger, and if we dedicate ourselves to defending it, freedom for all will ultimately prevail.