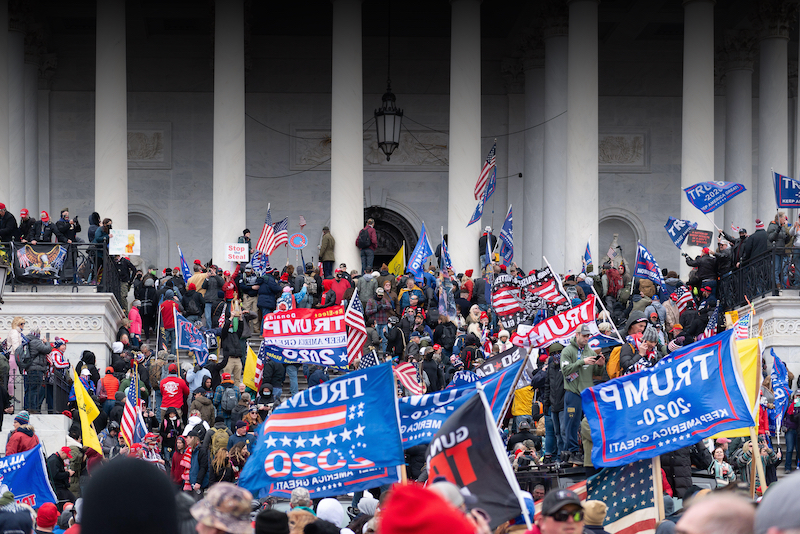 Six Months After Jan. 6, The Far Right Is Far From Down And Out

By Heidi Beirich and Wendy Via

By Heidi Beirich and Wendy Via

Originally published in The Hill.

You would think that a riot played out live on television, hundreds of arrests, and an administration focused on combating white supremacists and militias would dampen the growth of far-right extremist movements, politicians, and their activities.

But you’d be wrong. The number of arrests since Jan. 6 of white supremacist, anti-government and other hate actors is unprecedented, with federal prosecutors saying this probe is “likely the most complex investigation ever prosecuted by the Department of Justice.” More than 500 people have been charged in connection with that day’s violence at the U.S. Capitol.

Yet, this widespread crackdown hasn’t had as much of an effect as one might think. Yes, former Proud Boys leader Enrique Tarrio has resorted to selling Black Lives Matter T-shirts as his product sales dried up and payment processors dropped him. And several Proud Boys chapters have disassociated from the group since it was revealed that Tarrio was allegedly an FBI informer, which he has denied. Infighting among the Oath Keepers’ leadership has broken out with Stewart Rhodes, its head, warning he may be headed to prison. QAnon leader Q hasn’t posted since December, leaving followers to fend for themselves.

But these schisms and disputes don’t tell the real story. Despite the repercussions of the Jan. 6 violence, a report by the International Center for the Study of Radicalization at King’s College London revealed online extremist networks continue to spew hate, racism and bigotry.

Support for extremist groups that stormed the Capitol has burgeoned. According to the report, the Proud Boys have active Telegram channels with tens of thousands of members. During our observations of the group’s Western Chauvinist channel, we saw it is now explicitly white supremacist, sharing racist conspiracy theories like “The Great Replacement.” This dangerous ideology reportedly has motivated several terrorist attacks, including those on Christchurch, N.Z., mosques and at an El Paso Walmart. Neo-Nazi accelerationist channels that push for the collapse of democratic systems through such things as race wars continue to grow as well. We observed that as of today, even the supposedly defunct Atomwaffen Division and its offshoots had thousands of subscribers on Telegram.

And these groups have taken steps to make sure they are visible. Since Jan. 6, the Proud Boys have held 20 different events, some of which turned violent, according to VICE News. Other groups tried to co-opt the May anniversary of George Floyd’s murder.

Disinformation and lies that lead to violence continue to spread via social media and other means, including from the mouths of politicians like former President Trump and his cronies. Fifteen percent of Americans agree with QAnon that the U.S. government, media and financial worlds “are controlled by a group of Satan-worshipping pedophiles who run a global child sex trafficking operation,” according to one recent poll. The conspiracy theory is now as popular as some major religions in the U.S.

The possibility of mass attacks remains high. In rural Texas, a man found with Neo-Nazi and white supremacist paraphernalia, multiple weapons and ammo, was arrested for planning to carry out a mass shooting at a Walmart. Another Texan, who claimed to have been at the Capitol on Jan. 6 and was active on mymilitia.com, planned to bomb an Amazon data center in Virginia with C-4 explosives.

This is not just an American problem. As Michael Colborne wrote in January, the Capitol riot inspired far-right and white supremacist groups around the world. Both Canada and the U.K. have added far-right extremist groups to their terror lists in the last year, with Canada banning two more U.S.-based groups last week.

There are still Proud Boys chapters in Britain, Norway and Australia. QAnon has been coined a “global plague” and has followers in more than 70 countries according to one researcher, including roughly 450,000 in Europe. Much of this growth has been since the COVID-19 pandemic started.

The threat from growing right-wing extremism to the U.S. and global democracies is clear. Many of us thought that Jan.6 and its aftermath would be a reality check for Americans — extremism is on the rise and the insurrection was a direct attack on our democratic system by fellow Americans. Frighteningly, the opposite seems to be happening. Following Trump’s lead, many Americans, and some prominent Republicans in particular, are whitewashing what happened that day.

This is the challenge the administration and our democracy face. President Biden’s new blueprint to combat domestic terrorism rightly says the threat is “persistent and evolving” and contains strategies that should begin addressing extremism in the U.S. Importantly, there is also a strong international component, given the now transnational nature of this threat.

As is always the case, we’ll have to see if the blueprint and the administration will live up to its potential and promises.