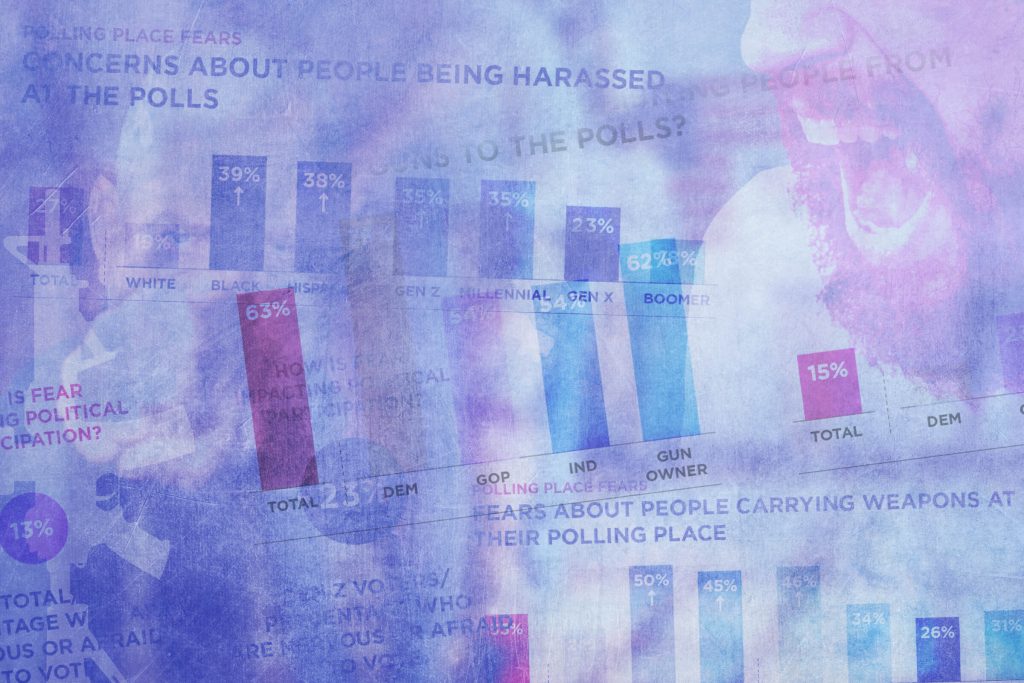 A new poll commissioned by GPAHE and conducted by Edge Research shows that Americans are generally more afraid than we were five years ago. We’re most afraid of crime, as expected, but we’re also afraid of each other. We feel as, or more,divided than we did during the Civil War. Mass shootings, political and racial divisions, and extremist rhetoric and violence are all taking their toll on Americans’ sense of safety and security. Most significantly, these fears are causing Americans to be wary of involvement in the democratic process, including voting, as many now fear their polling places are unsafe. Young people as well as Black and Hispanic people feel the most afraid to participate.

GPAHE conducted this poll because we wanted to measure the impact of growing extremism and violent attacks on Americans. We wanted to understand how, if at all, racially and politically motivated violence, extremist political rhetoric, and extremist group activity are affecting our willingness to participate in the democratic process and our general sense of safety.

What we found is alarming. Our sense of unease fueled by both violence and social division leaves the majority of Americans experiencing some level of fear about the potential actions of others in day-to-day life. Not a single place we asked about – the grocery store, schools, houses of worship, and more – was rated as a place that Americans feel “completely or very safe.”

Only 41 percent feel safe at polling places. The least amount of people, 22 percent, feel safe at concerts or festivals. Black (48 percent) and Hispanic (46 percent) people have a far lower sense of personal security in day-to-day life than white people (60 percent), and one-in-five young people (18-25) reported feeling actively at risk (19 percent at risk compared to 10 percent overall).  White and older Americans report feeling the safest, but they’ve experienced the greatest decline in sense of safety over the last five years.

Fears are divided along racial and party lines
We are united in our fear but divided, as on most things, on the cause. Half of Americans (50%) feel less safe than five years ago. The erosion in our sense of security is stemming from a number of factors – general crime but also our own divisiveness, with mass shootings being the exception. It is no surprise that for those of us who feel less safe than five years ago, 74 percent of us fear mass shootings, given the number of such incidents that our nation has witnessed in the last few years, and we fear both single actor shooters and coordinated violence from organized extremist groups. 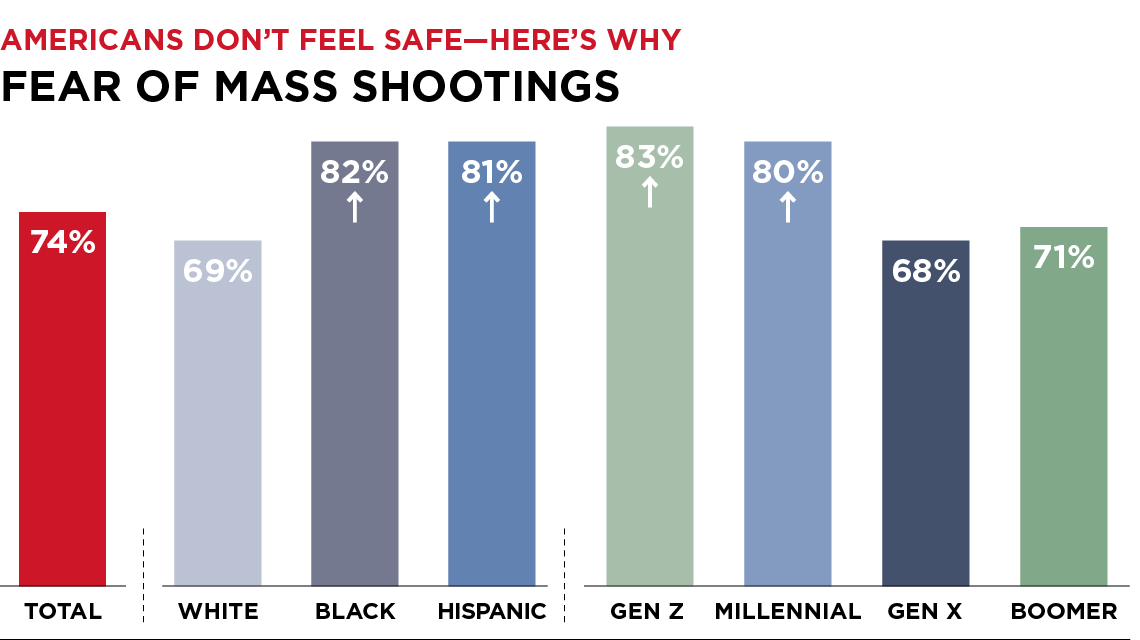 While it is still significant, fear from extremist activity falls lowest on the list of causes of anxiety, but white people’s fear of left-wing groups comes in at 28 percent while this anxiety barely registers for Black and Hispanic people at four and seven percent respectively. Twenty-one percent of white and Black people report fear from right-wing groups and 31 percent of Hispanic people express that fear.

There is also a party division when it comes to extremist actors and groups. Democrats are twice as likely as Republicans to be concerned about racially-motivated extremist groups and individuals who have been radicalized on the internet. And startlingly, Democrats are three times as likely as Republicans (46 percent compared to 13 percent) to be concerned about far-right extremist groups like the white supremacist Proud Boys and the antigovernment Oath Keepers. On Antifa, 22 percent of Democrats express concern compared to 30 percent of Republicans.

Fears about voting and the democratic process
Of significant concern are the fears about safety at polling places that the research revealed. While 41 percent of Americans overall feel safe at polling places, only 26 percent of young people (18-25) feel this way. Furthermore, Black (28 percent) and Hispanic (37 percent) people feel significantly less safe than white people (47 percent). People’s fear that our nation’s voting stations are unsafe is extremely concerning given that they are obviously the linchpin to a well functioning democracy.

We asked how nervous or afraid Americans are to engage in some of the common activities that occur around election time. In today’s climate, four in ten Americans are nervous to attend political rallies or marches, and more than a third, 35 percent, are nervous to show support for a candidate with a yard or window sign. Additionally, there is a clear danger signal for more fundamental participation in democracy – just over one in 10 (13 percent) feel nervous to vote and the number grows to 23 percent among young people and 18 percent among Black and Hispanic people.

When asked what they fear may happen during elections, Americans express concerns about a variety of scenarios both at their own polling place and across the U.S. on election day. Overall, 63 percent of those surveyed said they are “very worried” about at least one of these things – fraud, violence, harassment, or intimidation – happening at the polls, and significantly, at their polling place. 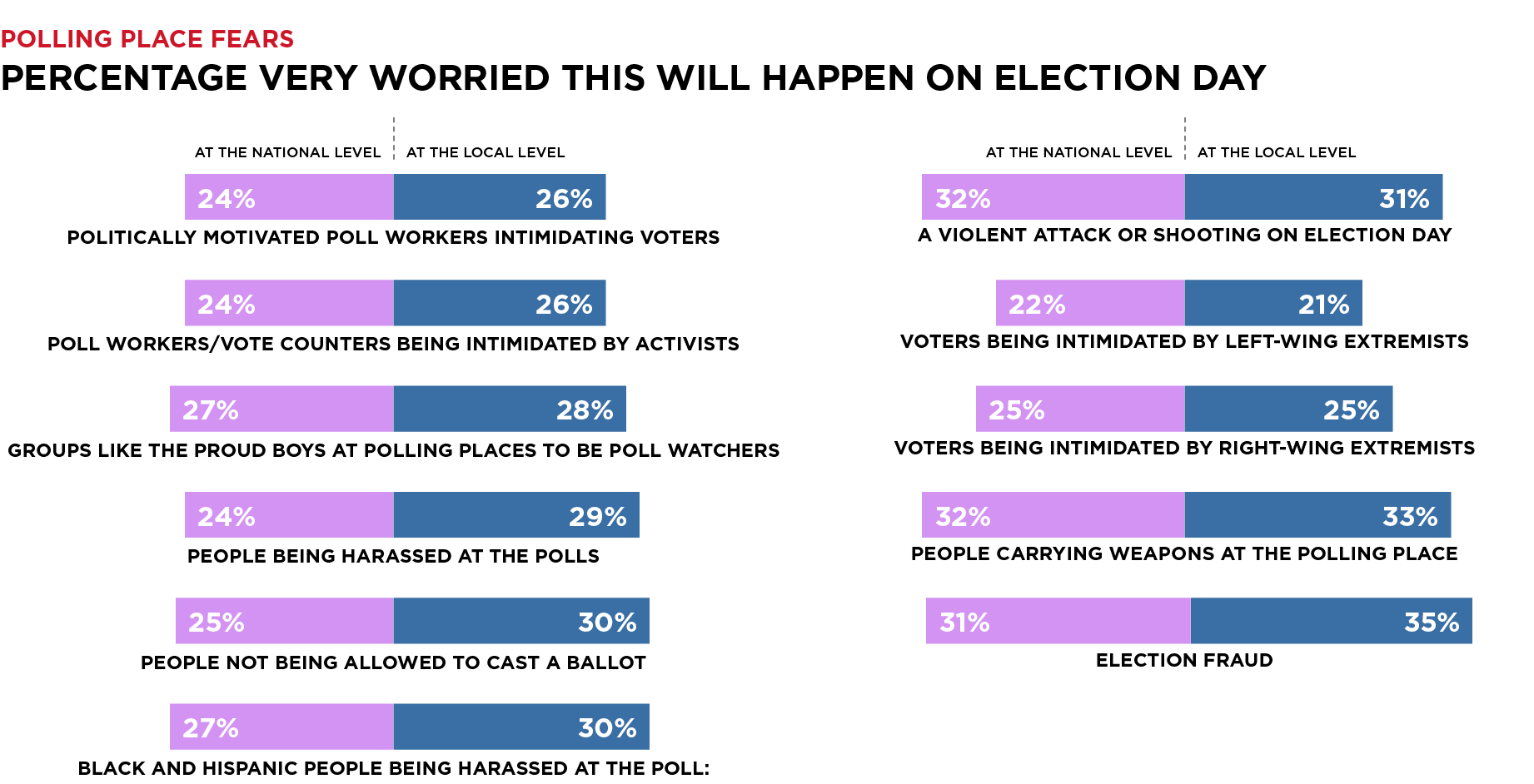 Voter fraud is penetrating as a concern for both Republicans and Democrats, but so is the specter of people bringing guns into polling places and the possibility of a violent attack. These three items are the top fears with about one-third of Americans who are very worried about at least one of these.

Another simmering concern is expansion of extremist activity from demonstrations and rallies to the polling place. Twenty-eight percent are very worried about organized groups like the Proud Boys showing up to act as poll watchers and 25 percent and 21 percent respectively are worried about intimidation from either right-wing or left-wing extremists.

Heightened levels of concern among young people and Black and Hispanic people are driving many of these numbers, while white people express lower than average concern about all polling place scenarios except fraud, even though research has shown that voter fraud does not exist on any significant level.

That said, the potential of voter intimidation and harassment are of grave concern among a quarter of the public (27 percent), as is voter suppression with 27 percent expressing worry that people will not be allowed to cast a ballot. These numbers are even higher among the groups who have historically experienced harassment and disenfranchisement with 45 percent of Black people and 37 percent of Hispanic people very worried about harassment and 40 percent and 37 percent respectively worried about being denied the ability to cast a ballot.

The consequences of voter fear are significant
We asked survey respondents what they would do if they experienced intimidation, harassment, or attempts to disrupt elections and received mixed results from the respondents. When asked if intimidation, harassment, or fraud happened at your polling place while you were there, half of Americans, 50 percent, would notify police, and 45 percent would notify election officials, but far fewer would speak up in the moment, 29 percent. Distressingly, fully 17 percent said they would leave without voting. Young people (26 percent), Black, (25 percent), and Hispanic (24 percent) people responded that they would leave without voting. Equally concerningly, a third, 34 percent, would warn others not to go to that particular polling place. This is especially problematic when voters have a designated polling place and could result in Americans not exercising their right to vote.

Guns should not be allowed at the polls
Our survey found that restricting guns at the polling place has widespread support. Sixty-three percent of those surveyed support the banning of guns at the polls. Among Democrats, that number rises to nearly 80 percent, but more than 50 percent of Republicans and Independents also support such a ban. Importantly, 62 percent of gun owners support a ban with only 22 percent of gun owners opposed. Given the level of anxiety found among voters, especially among young and minority voters, secretaries of state and other governmental entities should exercise their ability to prohibit firearms at polling places. Currently, a total of 12 states have prohibitions on carrying firearms at polling places, eight states prohibit both open-carry and concealed carry at the polls, and four prohibit concealed carry only. 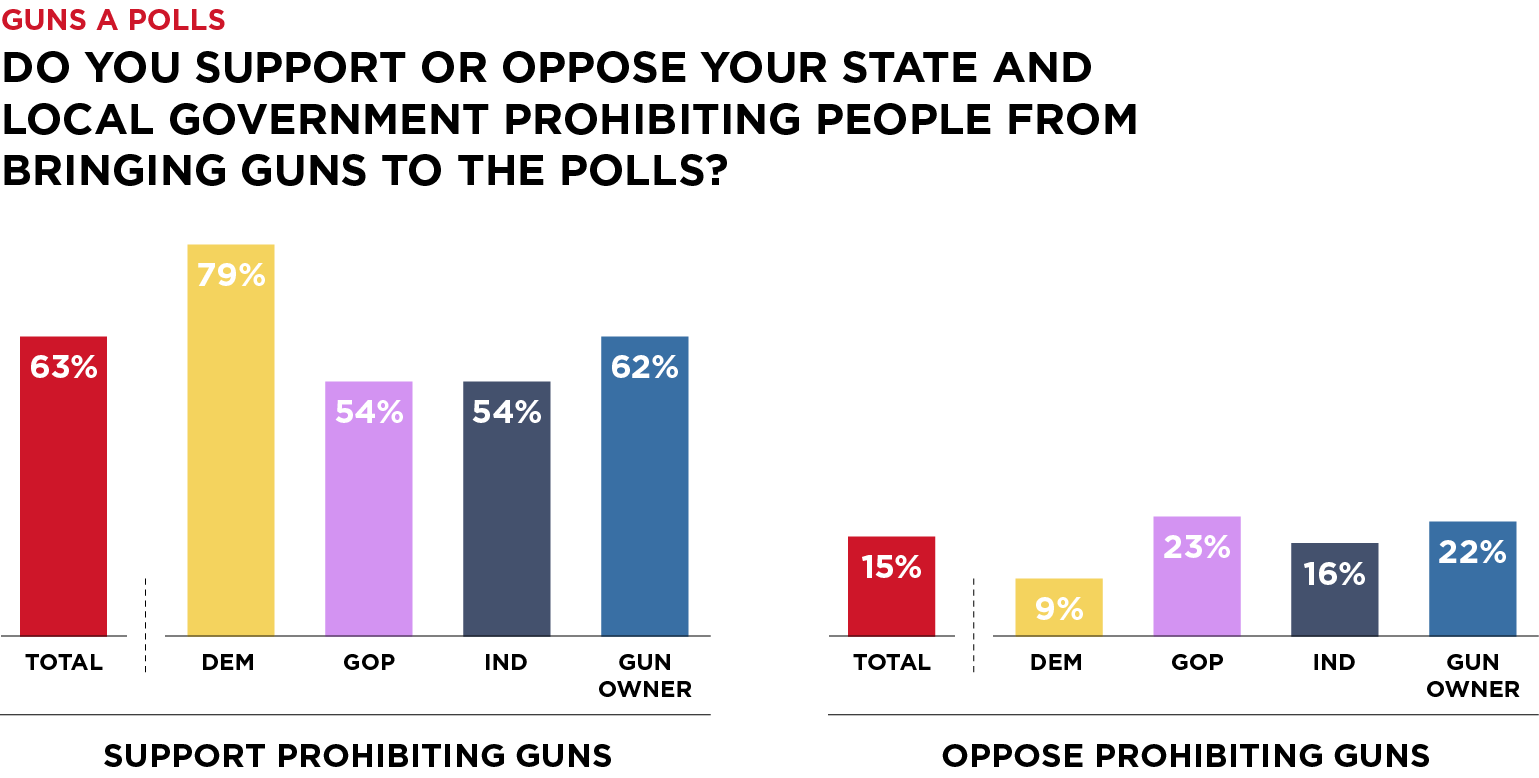 Conclusion
In an environment where white supremacist groups like the Proud Boys are showing up at town halls, campaign rallies, and school board meetings, where people are carrying their AR-15s into campaign events, and where politicians are pushing divisive narratives, it’s no wonder that people are more afraid now than they were five years ago. And it’s no wonder that people feel the country is as divided as it was at the time of the Civil War.

This polling data illustrates multiple threats to democracy.  Clearly, Republican voters are showing a propensity to ignore real dangers posed by the actions of groups like the Proud Boys and Oath Keepers that are identified by the FBI and other law enforcement as the most significant domestic terrorist threat in the United States. We also see that both parties are increasingly willing to see the other not only as different but as a danger. If we as a people, Republicans and Democrats, continue to dig our heels in, we run the terrific risk of failing to recognize and take action to stop the very real extremist groups that pose a threat to our physical safety and the democratic process in this country.

What the data shows us about the impacts of fear and extremism on democratic participation is sobering and a shameful commentary on our states’ ability to instill confidence in the election process. Quite a bit of airtime has been devoted to the voter fraud discussion and debunking the “stolen election” lie, even though there is no evidence for that fraud actually occurring.  At the same time as fraud is dominating election discussion, at least 18 states have made it harder for citizens to vote since 2020.  Adding fear of voting to the mix is a recipe for democracy’s demise.  It is clear that Americans need assurance that their elections will be both fair and safe.

Completed interviews are weighted by five variables: age, sex, geographic region, race and education to ensure reliable and accurate representation of the total U.S. population, 18 years of age and older. The raw data are weighted by a custom designed program which automatically develops a weighting factor for each respondent. Each respondent is assigned a single weight derived from the relationship between the actual proportion of the population based on U.S. Census data with its specific combination of age, sex, geographic characteristics, race and education and the proportion in the sample. Tabular results show both weighted and unweighted bases.

YouTube is a superspreader of the “Great Replacement” conspiracy theory
June 23, 2022