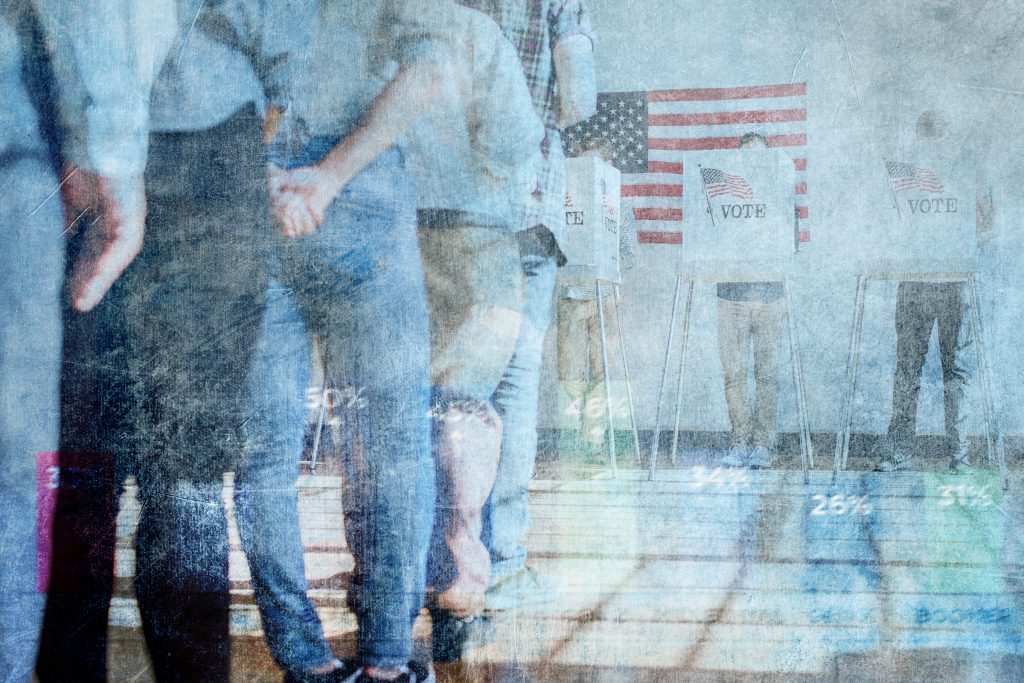 On Thursday, the Global Project Against Hate and Extremism (GPAHE) released new data from a poll it commissioned from Edge Research showing that nearly a third of Americans fear a violent attack on election day and intimidation at the polls. The data also shows that, due to various factors, Americans generally feel less safe than we did five years ago. In fact, not a single place we asked about – the grocery store, schools, houses of worship, and more – was rated as a place that Americans feel “completely or very safe.” Fear and concern for safety are greatest among Black, Hispanic, and young people.

Another simmering concern is expansion of extremist activity from demonstrations and rallies to the polling place. Twenty-eight percent are very worried about organized groups like the Proud Boys showing up to act as poll watchers and 25 percent and 21 percent respectively are worried about intimidation from either right-wing or left-wing extremists.

According to GPAHE, these fears are causing Americans to be wary of involvement in the democratic process, including voting. Young people as well as Black and Hispanic people feel the most afraid to participate in elections. Thirteen percent of respondents indicated that they feel nervous or afraid to vote. Among young people, that number jumps to 23 percent. For Black and Hispanic people, nearly 20 percent are afraid to vote. If confronted with harassment at the polls, a significant number say they will leave without voting. This was especially true for young people (26%) and Black (25%) and Hispanic people (24%).

“These findings are extremely alarming,” said Wendy Via, co-founder and President of the Global Project Against Hate and Extremism. “Not only are people afraid as they go about their daily lives, they are scared they will face intimidation and threats at their own polling places. The fear people are experiencing — especially Black people, Hispanic people and young people — is a form of voter suppression that needs to be addressed before the election.”

The poll found that restricting guns at polling places has widespread support, including among gun owners. The data, separated by race, party, and age also uncovers fears about mass shootings and other forms of violence, extremist activity including from groups like the Proud Boys and Oath Keepers, and shows that many Americans are nervous to participate in other parts of the democratic process, including attending rallies, opening their door to a canvasser, and even putting up a yard sign.

GPAHE also sent a memo Thursday to secretaries of states across the country, sharing the alarming data and recommending that states:

“This is a shameful failure of our democracy,” said Heidi Beirich, co-founder of the Global Project Against Hate and Extremism. “Our states are failing  communities that have been historically disenfranchised, and they are failing young voters. In an environment where white supremacist groups like the Proud Boys are showing up at parades, town halls, campaign rallies, and school board meetings, and where people are carrying their AR-15s into campaign events, it’s no wonder that people are more afraid.”

According to the survey, the fears surrounding elections and the democratic process are real and have the potential to suppress participation and infringe upon Americans’ right to vote. More data and findings available here.

“What the data shows us about the impacts of fear and extremism on democratic participation is sobering,” Via said. “ Election fraud, which is virtually non-existent, has dominated the discussion while people’s fears are rising. Adding a fear of voting to the mix is a recipe for democracy’s demise.  It is clear that Americans need assurance that their elections will be both fair and safe.”